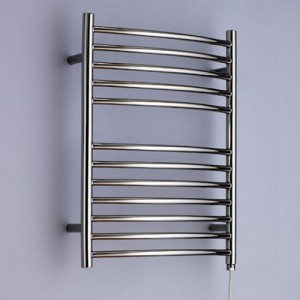 Sussex stainless steel towel rails are the highest quality bathroom towel rail that money can buy why? they are made from the best materials (stainless steel) and with the best engineering that Britain can muster yes “made in Britain” Sussex to be precise.

The benefits from stainless steel for building heated towel rails for the bathroom and cloakroom is that they will nor rust or rot hence a 25 year guarantee, the heat output is 25% more than a chrome towel rail and they are more environmentally friendly being that they are made from 95% recycled material.

They are available in a variety of sizes and can be supplied as electric only, dual fuel kits are also available so you can run off of central heating and in the summer months electric to keep those towels toasty all year around.

Prices start from as little as £139.00, for the best prices and to view the whole selection visit Tapstore.com here. 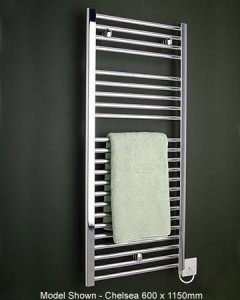 Electric heated towel rails are a good alternative if adding adding central heating is not an option, All you need is a 13amp electrical power supply and that is it.

There are not the sizes available unless you special order but for a good selection tapstore.com will be worth a look as they carry lots of different sizes and will also order any of there standard ranges for you if you require.

The heated towel rail shown is the Chelsea 600mm x 1150mm in chrome available from Tapstore.com for £228.05 including delivery mention the bathroom designer and get an extra 5% off. 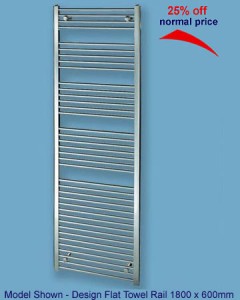 Just a little tip to keeping you warm in your bathroom when thinking of which Heated towel rail to choose think taller, when there is little space to fit your bathroom heating in then choose the tallest towel rail as you can easily compromise on the height but not the width of area, buy selecting a tall rail you are much more likely to get the correct heating output to satisfy the bathroom or shower room with the desired temperature you require.

This Towel rail from Tapstore.com measures only 300mm wide but stands up 1800mm leaving more space for the towels and allows the heat to radiate at the same time. 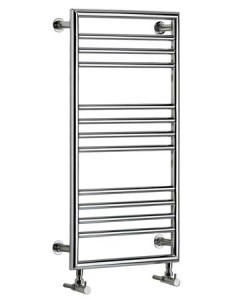 With the Diana heated towel rail you get the style and design all in one package that will last for years to come, The simple rounded rails and square appearance of the Diana will make an immediate impact in any bathroom. This handmade brass with a high quality chrome coated towel rail gives an excellent heat output, more that a steel towel rail and will not rot in years to come. Being made from brass it is suitable for all plumbing systems direct or indirect and will stand the test of time. 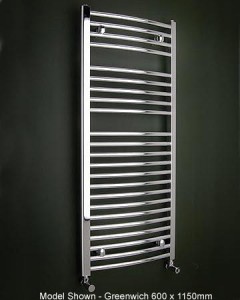 The Hove Heated Stainless steel towel rail is another fine example of the Sussex range from JIS, being Stainless steel it will give you at least 25% more heat than the standard chrome towel rail will produce and will not ever rot so you will pay more but the quality shines through with these towel rails.

To complement your new Hove designer radiator and to add that extra finishing touch that brings with it the practicality of somewhere to hang your towels they offer these useful towel hangers which are just as stylish as the rail itself. 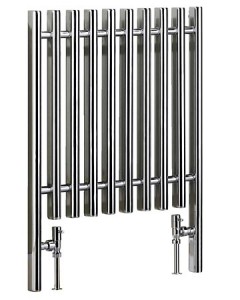 The strong and striking lines meeting smooth curves on the Ovali heated towel rail. This gorgeous feature will look right at home in every contemporary styled bathroom.

Jis have long since been producing the Sussex range of Stainless Steel towel rails like this stunning Arun as shown with a towel hanger attached, why pay more for stainless steel?

Stainless steel produces up to 25% more heating output than a Chrome towel rail, also it does not rust as most towel rails on the market today are made from mild steel with either a chrome or white finish they will eventually rust and in untreated heating systems quite quickly.

All of their models are available in three formats central heating/hot water, electric or dual fuel and are suitable for use in any plumbing system including open systems.